Marcasite has the same chemical composition as pyrite: FeS2, the same hardness (6-61/2), the same appearance and the same deposits, iron ore mines. The only difference is their Crystal System: orthorhombic for marcasite and cubic for pyrite.
Great specimens could be found in the mines in Peru, that could be used to make mirrors. These great plates are no longer to be found anywhere today. The production then came from Germany and the Jura. These rather small gems weigh most of the time two carats. 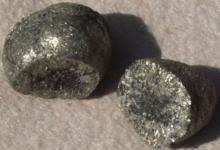 Marcassite, recognizable for its silver aspect, is an opaque material which becomes brighter thanks to an appropriate cut. With a rose cut (flat base and triangular sides), it is set as a pave jewel on silver and white metal and take advantage of the refraction of light.
Used in the past for shoe buckles, medallions and brooches, it had fallen into disuse until, during the 19th century, a great batch of marcasite arrived in Paris which gave the idea to set them like antique jewelry. These sets had a great success first in Paris, Geneva and the Jura. In the United Kingdom, stylish Victorian women matched them with their laces and refined clothing. Marcasite is often set with enamel and coloured glass paste, having in mind rococo rings and wristwatches (Louis XV of France). Women from the Second French Empire love them and such jewels are often as expensive as genuine ornament. But excessive production followed by a decline in the quality of the sets - although not cheaper - made the ladies eventually grow tired of it.

The popularity of marcasite reaches its peak during the 20's - the Golden Twenties. The bourgeoisie gets richer, and the ladies wear diamonds with their splendid evening dresses. Black diamonds cause sensation. Then comes the economic crisis and people need to look for a substitute to black diamond: and marcasite is perfect. Many of the antique jewels from this period are set like Art Deco.
There still exists today a real craze for silver and marcasite jewelry thanks to the vintage fashion, which consists of wearing real clothing and ornament from one specific period, the Victorian era - hence the expansion of a market for the reproduction of such items. 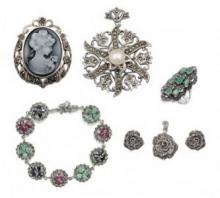